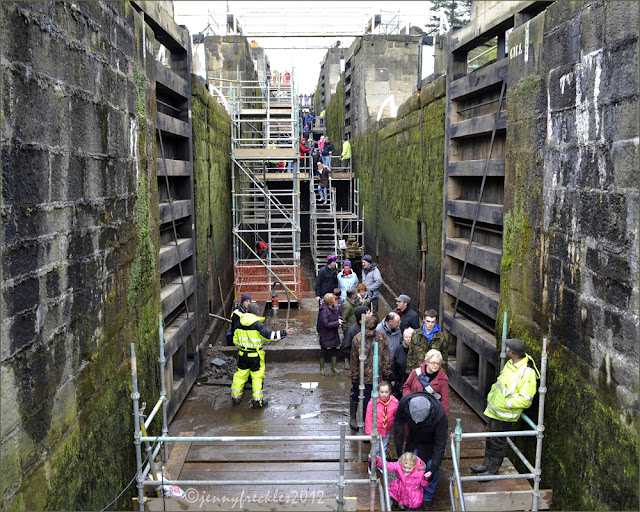 It was quite hard to capture, in one photo, a sense of the sheer scale of the Bingley Five Rise locks staircase. This shot, taken from near the bottom looking back up, perhaps comes closest.  You can see the 23 foot (7m) high stone walls of the lock chambers and one pair of the huge new lock gates, with beyond that another two pairs.  There are four pairs of gates being replaced, out of the six. As part of the project, the stone walls are also being inspected and repaired, using traditional lime mortar to preserve the authenticity of the Grade 1 listed structure.

The new gates were made of solid oak at the Stanley Ferry Workshops in Wakefield, one of only two manufacturers in the UK.  There's a photo here of one of the old gates being craned out of the locks;  they are being recycled.  It's all a massive undertaking, costing around £250,000 and involving the hire of a huge crane. In the old days they simply used ropes, an A frame, blocks and tackles and human strength!

I must compliment those responsible for enabling the public to enjoy this rare insight into our local heritage.  Judging by the queues, there were thousands of people as curious as I to see what is normally hidden underwater.   (The local press say 7148 people visited over two days.) I was surprised they didn't charge for entry - they could have recouped some of the cost of the project ... but instead there were collecting buckets for the 'Help For Heroes' charity, which aids our armed forces personnel wounded in recent conflicts like Iraq and Afghanistan.
Posted by ireng
Email ThisBlogThis!Share to TwitterShare to FacebookShare to Pinterest
Labels: Bingley, event, Leeds-Liverpool canal, locks, Yorkshire
Newer Post Older Post Home